By: DONYA DANIALZADEH
In: Uncategorized
With: 0 Comments 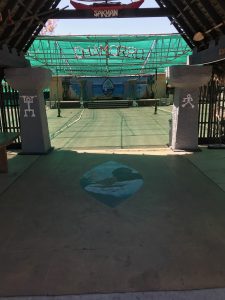 My visit to the Sons and Daughters of Guam Club was something out of the ordinary and definitely a highly educational and interesting experience. I decided to walk around the site, since no one seemed to be there during that specific time, and take some pictures. I saw a lot of artwork representing Guam and Pacific Islanders. I also saw many religious aspects such as religious statues in the front of the site (right when you drive in) and around the site itself. I could tell that a deep sense of community and culture was established here because of all the cultural artifacts depicted and the history through artwork and the way the site was built/designed. It was also interesting to see the flags in the front of the site because the American and California flag were presented, while at the same time the Guam flag and another flag I couldn’t quite identify. However, it was compelling to see how a site such as this that emphasizes the Guam culture, also acknowledges the American cultural as well.