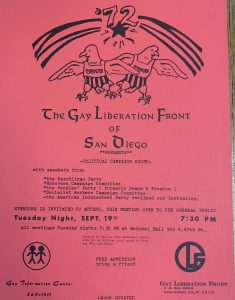 The 1972 Gay Liberation Front of San Diego Political Campaign Night flyer is festive, informative, and red. Proudly displaying two eagles (or are they seagulls?), this event invited the general public to attend a night of discussion and speakers from most major political parties of the time. There was someone from the Republicans, Democrats, the People’s Party, and a socialist party. The American Independent Party apparently declined to come.

The event was to be held at a Methodist Church near SDSU in mid-September. It was hosted by the Gay Liberation Front and admission was free. There is an address for the church, a postal box for the GLF, and a phone number for the Gay Information Center.