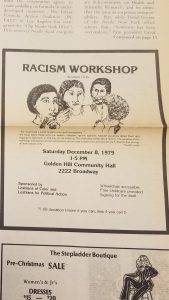 The newspaper Thursday’s Child, a feminist and lesbian publication from the San Diego Lesbian Organization, often included ads for events and workshops in San Diego. The December 1979 issue of this newspaper includes an ad for a workshop on page 7. Featuring a sketch of four women and an Audre Lorde quote, this ad is for a racism workshop. The purpose of this workshop “is for women of color and women of non-color to learn from and educate each other so that we may all work toward unity.” Sponsored by Lesbians of Color and Lesbians for Political Action, this event was for women only. The ad for this four-hour long workshop intended to reach a diverse audience by offering free childcare, signing for deaf people, wheelchair accessibility, and allowing participants to pay what they could. The workshop took place in San Diego on Saturday, December 8, 1979 from 1-5 PM at Golden Hill Community Hall 2222 Broadway. 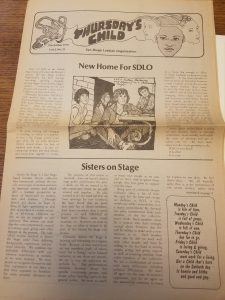 Published by the San Diego Lesbian Organization (SDLO), this is Thursday’s Child December 1979 issue. Made up of twelve pages, this is a newspaper focused on the lesbian community of San Diego. Included in this newspaper are events for the month of December, news articles, poems, short stories, letters to the editor, reprinted articles from other newspapers that focus on lesbians, announcements, and an advice section. Among those, the newspaper also has ads spread throughout the issue that are geared towards lesbians and women in general, such as the ad for a women only workshop on racism that was sponsored by the Lesbians of Color and the Lesbians for Political Action. The front-page article for this issue focuses on the SDLO moving to a new location in San Diego, with meetings for the organization taking place at the new location starting on December 6, 1979.