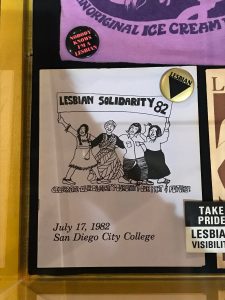 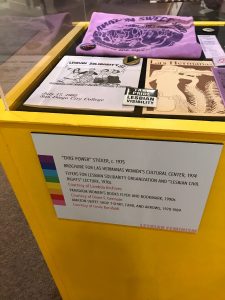 This booklet is for an organization known as Lesbian Solidarity from July 17 1982. “Celebrate our diversity, our unity, our past and future!” is written on the front cover below a drawing of four women. The group held this event at San Diego City College. With some research, I found that 1982 in San Diego was the first year with no Pride rally, since 1975. San Diego LGBT Pride (sdpride.org) writes that “the lack of of a rally was probably due to the continued split between Pride and many members of the lesbian community, many of whom were political activists.” Another digital platform “Out on the Left Coast” mentions the Lesbian Solidarity March at City College which took place the summer of 1982. The document is part of the Lambda Archives and is currently on showcase in the San Diego History Center. It is showcased in the “Lesbian Feminism” labeled box along with several other historical San Diego lesbian items.