The Race and Oral History Project (ROHP) is a collaboration of UC San Diego students, faculty, librarians and community-based grassroots organizations dedicated to documenting and sharing the stories of understudied racial and ethnic communities in the Greater San Diego region.

Through these stories, we capture a San Diego shaped by histories of settler colonialism, war, displacement, and criminalization, and reveal the efforts to confront systemic injustice and to work towards a different future through community building and activism.

The project’s objective is fourfold: 1) to empower understudied communities to tell their stories through oral history; 2) to create an archive of oral histories for the study of militarism and migration in San Diego; 3) to train students in oral history method, theory, and interpretation and in digital literacy skills; and 4) to work toward repairing the historically extractive relationships between UC San Diego and surrounding racial and ethnic communities.

San Diego, which occupies the unceded lands of the Kumeyaay people, is built on conquest and militarization. It has been a major hub of military and defense activity for much of its modern history. Its landscape reflects this history of militarized control. The region today is marked by military bases, defense and aerospace industries, detention centers, border checkpoints, and the border wall.

San Diego is home to a continually growing migrant and refugee populations displaced by U.S. wars in Southeast Asia, the Pacific, and Central America, and more recently by wars in Iraq, Afghanistan, Syria, Somalia, and other countries. San Diego’s vast defense industries and military training facilities fuel the wars and displacements of these populations. Its proximity to the U.S. Mexico border and ongoing colonization of the Kumeyaay nation have intensified the criminalization of indigenous and racialized populations.

In the neighborhoods of Barrio Logan and Logan Heights, migrants from Mexico and Latin America have settled, built and maintained vibrant communities. Filipinx and Chamorros have done the same in the South Bay, many connected to work in the Navy. And others, notably asylum seekers from Central America and elsewhere, are living in perilous conditions detained at Otay Mesa Detention Center. 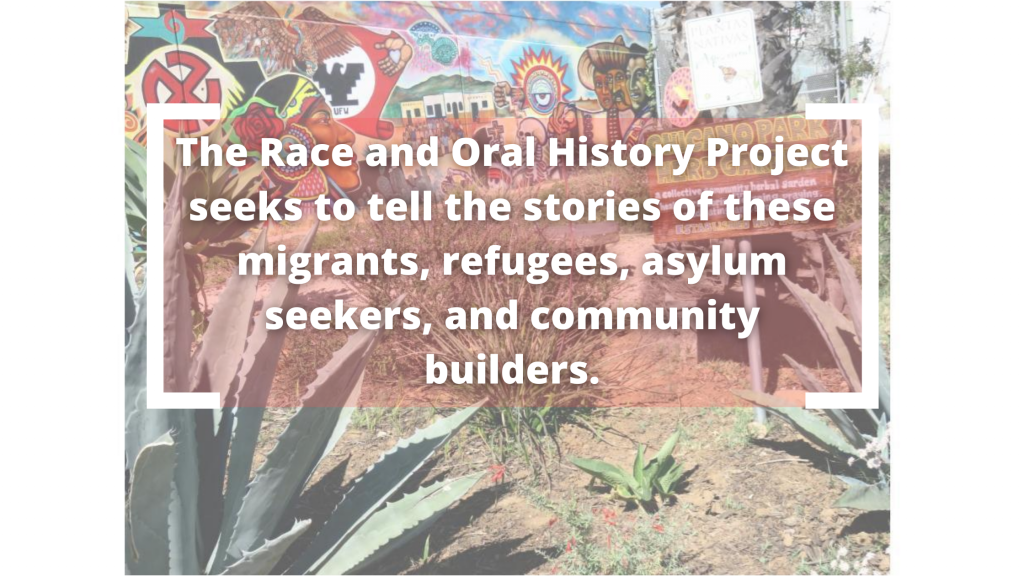 The Race and Oral History Project seeks to tell the stories of these migrants, refugees, asylum seekers, and community builders. The project involves collaborations with grassroots community-based organizations such as Allies to End Detention, Barrio Logan College Institute, Casa Familiar, United Women of East Africa, and many more. These organizations work to confront systemic marginalization and violence by empowering their communities through the arts, education, mutual aid, and advocacy.

In centering these communities, the project creates a history of San Diego not commonly reflected in high school and college curricula. The subjects of these stories are simultaneously understudied and overstudied by academics, so at the heart of this project is a methodological concern: how do we ethically tell stories that capture people’s complex lives beyond the boundaries of academic disciplines? Through Oral History, we center these subjects as narrators and affirm their roles as creators of knowledge and of their own histories.