Dear Future Students, HIUS 120D, or the Race and Oral History of San Diego class, is one that I recommend everyone taking! Personally, when I first looked at the syllabus and heard that I would be having to go to a community site (for me, the Barrio Logan College Institute) every week, I thought it would be an overwhelming amount of work. I thought the class would be stressful and the assignments overwhelming. However, this class proved me wrong. The workload was very doable and enjoyable. Especially in comparison to your average UCSD class, the work felt meaningful in that I knew it was contributing END_OF_DOCUMENT_TOKEN_TO_BE_REPLACED

For this Oral History Interview, I talked with Jennifer Gonzalez, one of the lead organizers for Detainee Allies. Jennifer has had an interesting and varied life, arriving by roundabout from practicing law to engaging in social work advocating on behalf of asylum seekers and now those detained in Otay Mesa. Jennifer went from Stanford Law to immigrant rights work in North Carolina, solidifying her decision to use the law as a tool to help the most marginalized in the American legal system. We both connected through my volunteer work at Detainee Allies over our mutual understanding that direct action, in particular the development and circulation END_OF_DOCUMENT_TOKEN_TO_BE_REPLACED

END_OF_DOCUMENT_TOKEN_TO_BE_REPLACED

Dear future Students, The Race and Oral History course will provide you with a learning experience that is beyond the classroom and can not be replicated in the classroom. You will be given the opportunity to work with the community, while at the same time learn valuable skills. You will learn how to use different technology, conduct an interview, transcribe an interview and numerous other skills that are specific to the community partner you choose to work with. I worked with Detainee Allies an organization who writes letters to people in detention centers. I participated in their Monday night meetings. At these meetings we read END_OF_DOCUMENT_TOKEN_TO_BE_REPLACED

END_OF_DOCUMENT_TOKEN_TO_BE_REPLACED

Dear Future Student, This class is really unique and special. It’s an unprecedented opportunity to leave the confines of the university institution and do tangible work with the communities invoked in the mostly theory based Ethnic Studies classes. In many cases, being able to work with your community partner means being able to leave La Jolla, and really discover some really precious pockets of San Diego. This class really allows you to have a more community based, praxis oriented lens. The oral history process is very rewarding, and it’s really amazing to hear people’s stories and narratives, which are very complex and unique. It’s great END_OF_DOCUMENT_TOKEN_TO_BE_REPLACED

END_OF_DOCUMENT_TOKEN_TO_BE_REPLACED 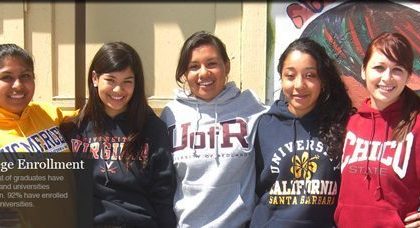 Ana Hernandez, who was born and raised a San Diego native, speaks about her experience with the Barrio Logan College Institute (BLCI), and how the program has profoundly impacted her and shaped her life in many ways. She went to high school in San Diego, and shares with us the different encounters she has faced as a current college student who decided to stay in her hometown. This interview covers the different obstacles Ana faced during her transition from high school to college, the most rewarding experiences she’s had, how she feels BLCI helped prepare her for college, as well as what she feels the BLCI can do to go above and beyond to continue to improve the program for future students. The interviewer met Ana through one of the instructors at BLCI who stated her opinion would be great since she had been in the program since the fourth grade. The interview was conducted at BLCI. The interviewer wanted to interview Ana because they wanted to hear her perspective on how her college experience was, since she was able to be a part of such a wonderful program like the BLCI. The interviewer is Sonia Valadez, a 4th year Political Science and Ethnic Studies major student at UCSD who is also a first generation college student who grew up in Fresno, CA. Sonia felt deeply connected to the interviewee and the Barrio Logan community, which reminded her of her roots and her community that is predominantly Hispanic with higher crime rates and low income households. Sonia wanted the interviewee’s perspective on her college experience and how BLCI has helped her as the interviewer also faced much hardship trying to attend college without any support from the community. The interviewer is deeply engaged and passionate about working with BLCI and interviewing their alum to hear about what they’re up to now, their experiences, and how they can better the program.
END_OF_DOCUMENT_TOKEN_TO_BE_REPLACED

Asiyah Ali is a San Diego born Somali American currently in the fifth-grade. She has been a part of the United Women of East Africa’s culturally tailored Girl Scouts Program for 4 years, which focuses on fostering leadership skills, maintaining healthy relationships, and financial literacy. In this interview Asiyah, the daughter of Somali refugees, shares what it is like growing up as a Muslim Somali-American, discussing her experience one of the only Muslim students in her fifth grade class, what quirky skills she wants to teach her younger brothers, and how to cook her favorite Somali food. Asiyah’s interview gives us insight on how some END_OF_DOCUMENT_TOKEN_TO_BE_REPLACED

Barrio Logan College Institute (BLCI) is an after school-type program that works to increase matriculation into higher education for those in the Barrio Logan community. Specifically, the organization serves a demographic of Latinx youth who are low-income, first-generation, and working-class. Entering BLCI requires an application, high parental involvement, and a commitment to the institute. The students are expected to attend weekly workshops and to be involved in the programs that BLCI offers. Because of this intensive program, the students are equipped with the skills to tackle higher education. Statistically, Barrio logan has low averages of annual income, less than five percent of those 25 and END_OF_DOCUMENT_TOKEN_TO_BE_REPLACED