By: Reilly Todd
In: Art Projects
With: 0 Comments 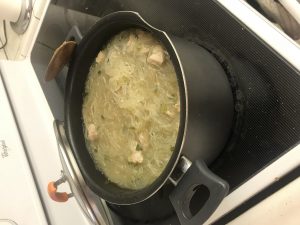 The first day I went to the Sons and Daughters of Guam Club, I attended a senior lunch where I met Roque. He was one of the men that were helping serve the lunch and welcomed me in right away. One of the first things that I discussed with Roque was the food that they had prepared for that day. In particular, I was curious about the soup that I was in charge of serving. He explained to me that it was called long rice soup, and was a traditional food in Guam. Richard, the chef, had prepared the soup himself and was one of the only things that were made from scratch in house. Not only did the soup look delicious, but also it tasted just as amazing. Besides being tasty, this soup brought me many conversations and helped me meet many of the seniors attending the lunch. While serving the long rice soup, I was able to briefly meet many of the regulars and have quick but meaningful conversations. It was an icebreaker that allowed me to connect with the people, but also gave me an insight to some of their culture. I decided to try and recreate this soup for my art project because it was the first thing that allowed me to connect with Roque and the people at the Sons and Daughters of Guam Club.