On May 9th, HIUS 144 traveled to Barrio Logan to visit Chicano Park. We were there (obviously) to look at the murals painted on the support columns of Coronado Bridge’s on-and off-ramps to I-5. I’ve actually seen these murals many times myself; for years, my parents and I would go to Padres games and car shows at the Convention Center, always passing by Chicano Park in some way. However, until that day, I’d never seen the murals up close and personally. Seeing individual artworks opened my eyes to how ingenious and detail-oriented the artists are.

I actually arrived to the area late. I’d had a take-home midterm for another class due that day that I’d been working on at home, and thanks to my printer not cooperating (as per usual, for an important assignment while I was in a rush to get someplace), instead of showing up at 2:30, like everyone else, I got there at 2:40. Thank God for my own car, right? Professor Alvarez was describing some of the murals in Chicano Park, in the event that a particular work’s focus was something that would pique our interests. Of course, being as how I’d spent the past 5 hours working and not having had anything to eat that day, the only thing that interested me was the concept of buying myself food while we were out on this excursion. Me, Isabella, Kalvin (I didn’t know he spelled his name like that until earlier this week, wild stuff) and others whose names I cannot remember because my memory is just *that* bad walked across the street to the panadería and taquería to get something to eat. (Author’s Note: Rolando’s Taco Shop sells breakfast burritos all day it’s L I T.) After acquiring the burrito, we walked back across the street to walk past the newly-gentrified building that now sits between Chicano Park and Cesar Chavez Parkway. We noted how quickly it and other “developments” in the area popped up.

One spring, my dad and I went to a Padres game and whatever was there before was there. We came back later in the summer and suddenly a brewery and accompanying building was there. After rounding the corner to Logan Avenue, I joked that the little intersection that was built there made the area look more like downtown Klantee – *ahem* – I mean Santee, under-visited businesses and all. I guess that’s what happens when you try to market to a community that’s not located where the establishment itself is located, but I digress.

We then walked into the skate park, conspicuously separated from the sidewalk by sand and river rocks. From there, we witnessed the full glory of the artwork filling Chicano Park.

I took the above photo depicting how under San Diego’s efforts to paint and construct over the Chicanx community in Barrio Logan, that the history still lies underneath (or at least that’s how I interpreted it, it’s not like there’s anybody being paid to curate and display this artwork). (Author’s Note: I don’t know whether it would be realistic if the community would be okay with something like that or flat out refuse. Guess we’ll find out eventually.) The best part, in my opinion, about that artwork, is that the urban decay of the mural itself adds yet another layer to the artwork, in that the paint peeling off reveals the original support column paint and graffiti from before Chicano Park’s founding in 1971.

Other artworks nearby similarly have interesting (and even double) meanings:

After surveying the works directly under the on/off-ramp, I had to throw away the wrapper for my breakfast burrito. I chose a trash can bordering a memorial celebration being held by a family. One of the men (Joker, who Represents Chicano Park) there asked if our group was here for a class, as well as what college we were from. I tried my absolute hardest to describe what the hell this class is about, but I can’t guarantee that I did too well of a job.

(Warning, I have no idea if I’m allowed to share this information, which I promptly told Joker (who Represents Chicano Park) before the following conversation)

(Author’s Note: I’m calling him “Joker, who Represents Chicano Park”, full title and everything, and you can’t do anything about it)

He then told me that he had been in Chicano Park since 1970 (a year before the park itself was founded), and that he’d been a part of one of the gangs in the area. He’d seen a lot of crime, including murder happen in Chicano Park. Because of what he’d seen when he was younger, he decided to do his best to keep his kids out of gangs now. According to him, originally the city wanted to build a police station right in the middle of Chicano Park, obviously because of the gangs, but the community itself refused, and dealt with that issue.

His family was there to celebrate the memory of his father, who’d recently passed away. To him, having an event in the middle of Chicano Park was the perfect way to do that because the whole family started and grew there, had always held events there, and because there’s always *something* going on in Chicano Park, whether it’s picnics, biker festivals or low-rider shows.

But here’s the fun part: he wanted me to take a photo of his family for our class. Of course, my awkward… behind… was not sure if we were allowed to take photos of people and then put them here or anywhere else we’d be able to put info or histories on. I was anxious about the whole concept, that is until no one else wanted to get up to take the photo, so it was just a photo of Joker, who Represents Chicano Park, in front of the Pancho Villa statue. 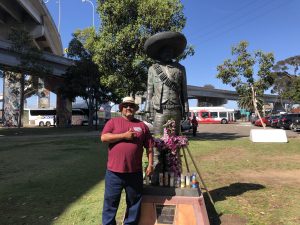 After that, the class came back together for some final words and pan dulce from Professor Alvarez, before we all split off. I’m glad that this was my first up-close-and-personal experience at Chicano Park. 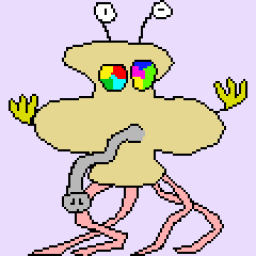